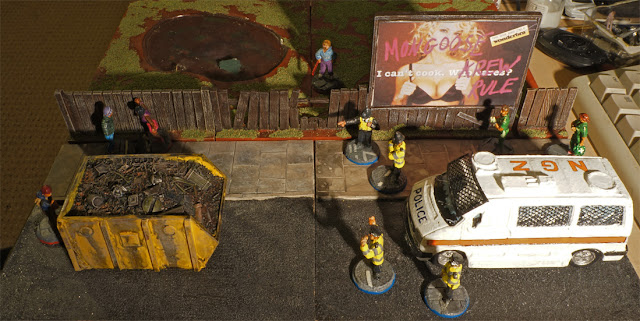 "Police and thieves in the streets
Oh yeah!
Scaring the nation with their guns and ammunition " 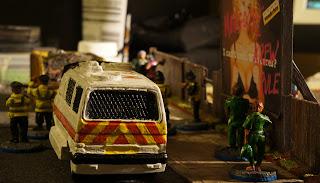 I've dug out my box of No Go Zone police and thieves from Warm Acre that have been lying around for months and finally put paint to lead.

So far painted up four cops, two paramedics, a hooligan, a law abiding citizen (or potential criminal), a vandal and a lady of negotiable virtue. 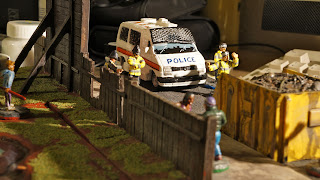 The terrain is made up of 6" square tiles of thin MDF which will eventually become part of my street fighting game. The fence and advertising hoarding is from Ainsty but I don't know if they still do it 'cos I can't find it on their website, which is a shame as I want some more. 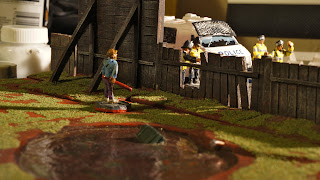 Lurking behind the advertising is the one proper criminal of the bunch I've got painted. Or is he just waiting for his mates to turn up to play a game of rounders? 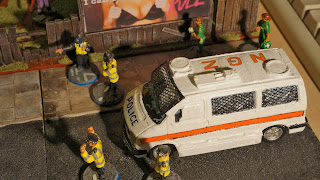 Cops and Paramedics. I need to get an ambulance as well as a police car or two. Maybe a light tank. 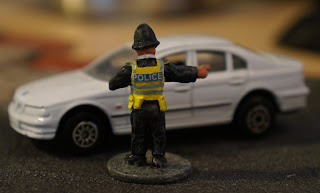 The POLICE lettering on this coppers back was printed out on my printer at 900dpi, sealed in with matt varnish and glued on.
Posted by Felonmarmer at 15:02